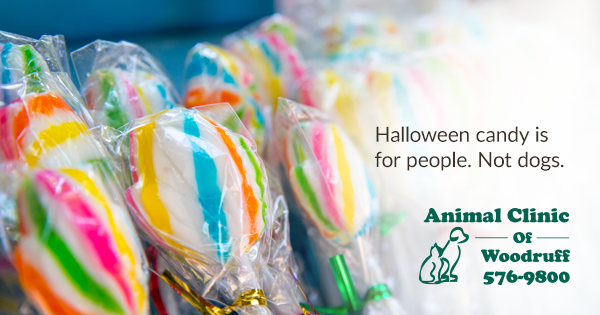 Despite the best intentions of loving pet owners, we suspect that Halloween might be among a pet’s least favorite holidays. They are often dressed in costume, which makes for adorable photos, but often means animals spend the evening rather uncomfortable. Dogs are closed in rooms and crates and told not to bark, even though strangers keep coming to the door all evening. And perhaps worst of all, they are surrounded by the smells of candy, often held at their nose level by small hands, but told not to eat it.

This Halloween, no matter how much your dog begs for treats, it’s vitally important to keep candy away from your pets. While most of us know that chocolate can be toxic for dogs, there’s another culprit in candy that can also cause distress: Xylitol. Used as a sweetener in candies, gums and baked goods (especially those labeled “sugar free”), as well as toothpaste and occasionally chewable vitamins, xylitol can be extremely toxic, even life-threatening, to dogs.

Veterinarians have known for years that dogs that ingest xylitol experience a rapid (often, within 30 minutes) drop in blood sugar, which can lead to loss of coordination, vomiting, diarrhea, weakness, tremors, and even seizures. The effects are even greater if the dog eats products with xylitol as the first ingredient. (Luckily, cats don’t seem to have this trouble, though they certainly should not be allowed to eat xylitol-containing products.) Recently, xylitol consumption has also been linked to causing liver disease and/or failure in dogs, which is often fatal.

To keep your dogs safe from xylitol poisoning, take special care in the house around these products, which often contain xylitol:

If you suspect your dog has eaten anything containing xylitol, bring the dog to our on-site emergency veterinary care. If Animal Clinic of Woodruff is closed, we can recommend a local animal emergency clinic. Xylitol poisoning acts quickly, so do not delay in having your dog checked and treated.